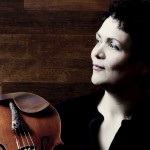 The Gürzenich Orchestra from Cologne has a remarkable and celebrated history. “They premiered the Double Concerto by Johannes Brahms, two symphonies by Gustav Mahler and the symphonic poems of Richard Strauss,” says Prague Spring Programme Director Josef Třeštík. It is still one of the finest and most intriguing orchestras on the scene today. “Under the guidance of its Chief Conductor François-Xavier Roth it has built up a fascinating repertoire spanning the Baroque to the present day and it works with some of the world’s top soloists, such as violist Tabea Zimmermann,” Třeštík adds.

“The knowledge that Paul Hindemith himself stood on the podium in Prague is a great inspiration for me for my performance of the piece with my musical companion Tabea Zimmermann,” Roth states. “The Gürzenich Orchestra has Richard Strauss in its DNA, and we included music by the wonderful Czech composer Leoš Janáček on the programme in honour of our host,” concludes the French conductor, who will make his Czech debut at the festival with two concerts. A day before this concert with the German orchestra he will conduct Les Siècles, a French orchestra performing on period instruments which he founded almost twenty years ago; the programme in this instance will combine works by César Franck and Claude Debussy.